Olivia was born premature and was other than little, healthy....or so we thought. At around 9 month checkup, her pediatrician noticed that she was not developing mentally, physically and that her head was growing off the chart. After a trip to the orthotics place, and a referral to the neurologist we thought we would simply get a helmet to reshape her skull and all would be well.....Don't ever count your chickens before they hatch.....MRI of the brain at the neuro office showed that Olivia had a vascular malformation of the brain. Further testing determined that it is inoperable. What came with that.....Possibility of seizures, blindness, aneurism, stroke or death....It was decided that she would be monitored every few months...Routine MRI..NOT...The next MRI led them to do an ultrasound because something in her neck looked different so we now have discovered that there is a tumor on the paratiod gland in her neck...what comes with that you may wonder...deafness in the right ear, trouble swallowing,trouble chewing,. So in the course of from the time Olivia began seeing dr for specific things in her short life, we have now turned 2 in June have extended our diagnosis list, have been to several drs before we found one actually able to TEST and TREAT Olivia and we found them in Denver, Colorado. Olivia at the age of 2 is an autistic child with an inoperable vasuclar malformation, a tumor on the paratiod gland, external hydrocephalus(too much water on outside of brain),developmental delay,L-Carnatine Deficiency,Seizure Disorder,and Celiacs disease...

Fast forward and Olivia is now 4 and half years old!  She is just a ball full of energy and love. She is the strongest little girl I have ever met although her sisters do put up a good fight as well.  However, her diagnosis list is still pretty long.  Olivia at the age of 4 has hydrocephalus, seizure disorder, focal cortico dysplasia, autism, intestinal dismotility, loop iliostomy, vascular malformation in the brain and a tumor on the paratoid gland and developmental delays. On November 11th the start of a very long journey began.  After months of not being able to use the bathroom and being in extreme pain almost constantly the great doctors decided that surgery to put in a colostomy was necessary. 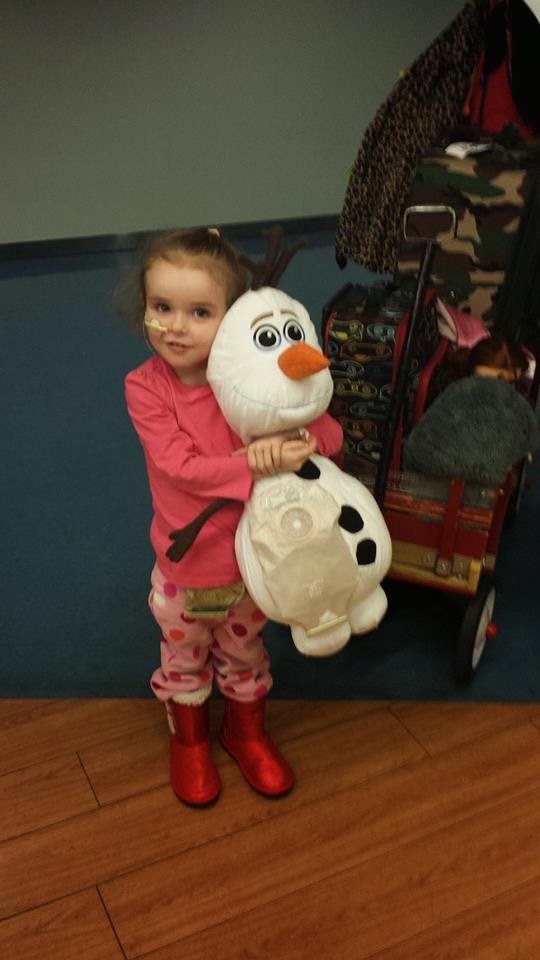 After the surgery there has been ups and downs.  On December 11th Olivia was transported back to the hospital where Olivia had what is called intestinal prolapse where her intestines that formed the ilieostomy were protruding out... it looked like a hot dog.  The on call surgeon put her "asleep" enough to push the intestines back in. There were several discussions about operating but Dr. Lam has seen her past few weeks and felt that in Olivia's best interest she needed Dr. Bealer who operated on her day 1 to fix this. He said for her sake consistency with the Dr. is what was important and I'm glad he felt that way and cared enough to be honest about it. Currently she is waiting to see the surgeon and see what lies ahead but it's a high probability that yet another surgery is in the near future.

We are in the beginning stages of forming a benefit to happen around June 2015.  Please share, like, and follow so that we can get the word out and help this sweet little girl with all the hospital bills she is incurring.  If you would like additional information or would like to donate please comment below.
Prayers for Olivia at 10:14 AM
Share